Thanks for designing these beautiful houses in Detroit so many years ago. Now that the trees are grown in, it’s a special place. So special it was added to the National Register of Historic Places in 2015. But we should be upfront: there are some things we have to talk about. We’ve made changes.

We spent hours poring over your original drawings now in safe keeping at MoMA in New York. As we studied the numerous revisions of the floor plan, we saw you (and let’s be honest, your sizable office) slowly crack the code of these townhouse units.

Those ground floor cores that contain kitchen, bathroom, and coat closet! You would be sad to see what people have done to them over the years. The little “wing walls” that so efficiently allow your core to bring subtle hierarchy to the spaces of the ground floor have been disrespected in numerous ways—in some cases shaved right off. With the exception of the basement we took your plans as a given, so the wing walls became something of a fixation.

Look, it’s fashionable these days to restore the units as accurately as possible, but truthfully kitchens and bathrooms from the 1950s and 60s were pretty dreadful. We kept the kitchen in its original location but otherwise it’s all new. We copied and offset your wing walls, creating a formal echo that leaves a shadow gap between your work and ours. Call it respect.

The new kitchen we designed is set back inside this wrapper. The surfaces are as flush as we could get them. In a project where the historical designation took big spatial moves off the table from the start, we pushed things as far as we could to the other pole. We built a graphic.

Verde Alpine marble is used as a nod to the material legacy of Mies (it was a favorite in his corporate lobbies).

New cabinets above are detailed with a corrugated face that visually erases the seam between doors when seen from the oblique. 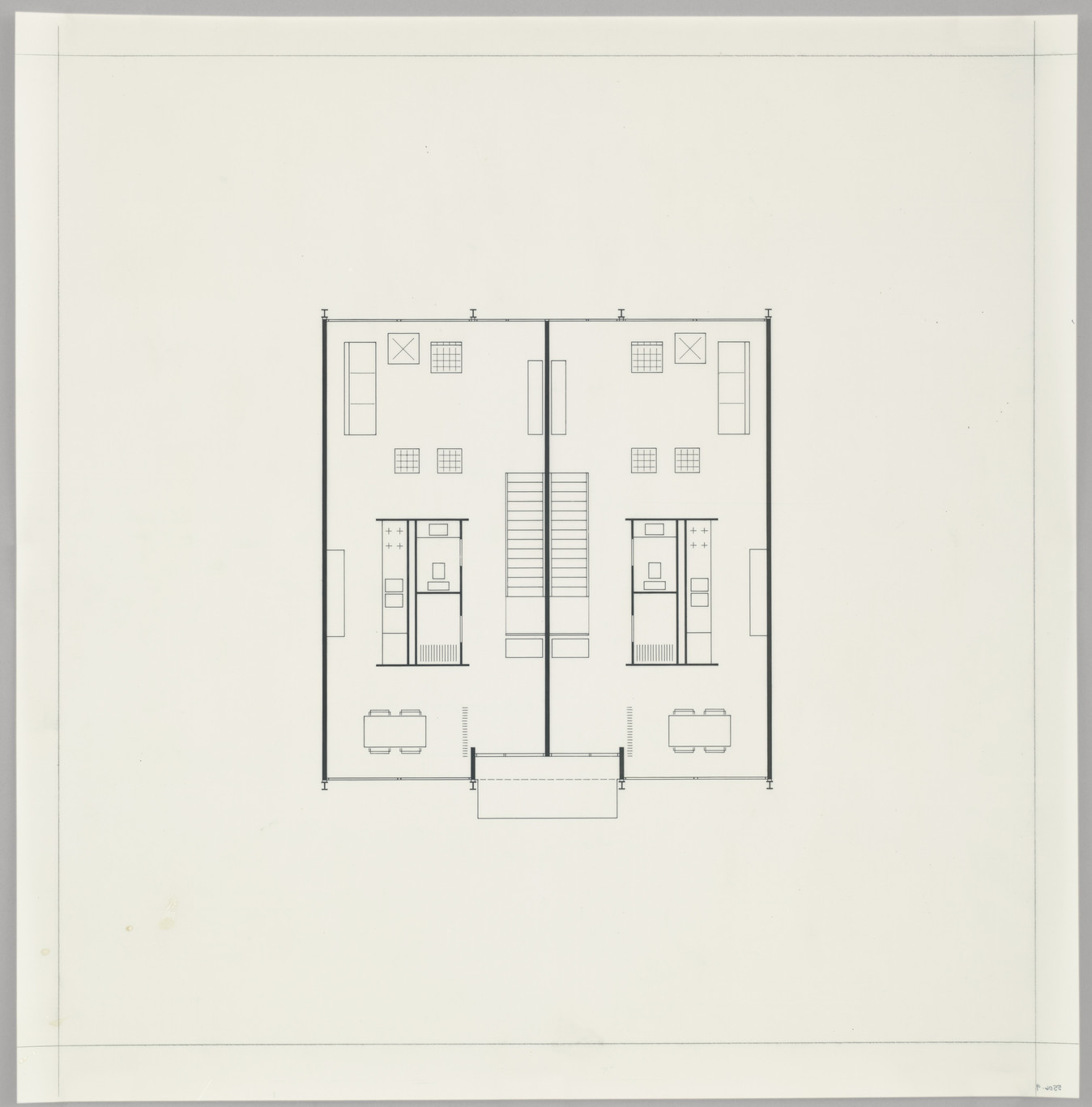 We noticed in some of your drawings that there is a curtain separating the entryway from the dining room. For some reason it was never built in any of the houses, but we finally installed that for you. It’s not exactly a restoration because you can’t restore something that was not built, but our friend Jason suggested we call it a “director’s cut” and that seems about right. Thought you might get a kick out of this posthumous victory. Also, it’s good to have a bit of Lilly’s voice in the project.

We studied your stairs in other projects to get a fix on where the paint stops and the rules were simple once we decoded them. Actually, it’s only one rule: paint the metal. All of it. Black. It seems like you had to make trade-offs in the townhouses because you went all out on elements like the stairs and facade but others, like the floor registers, were off the shelf pieces. Hope you don’t mind that we replaced those with custom pieces that sit flush with the floor. They’re aluminum, just like your facade, and anodized black to match the stairs.

And then there are the bedrooms (one of which is repurposed as an office, shown above). When we first saw your original closet—created with ceiling-mounted sliding doors and cheap hardware—we could see you cringing. Lafayette Park is no Villa Tugendhat, so we understand that the budget didn’t allow for the same intricate wood veneered millwork that you generally use instead of closets. Our budget didn’t afford it either. Instead, we borrowed your clever soffit detail at the facade and created a similar nook in the closet. Now on both sides of the room the intersection of vertical to horizontal is tucked out of sight. 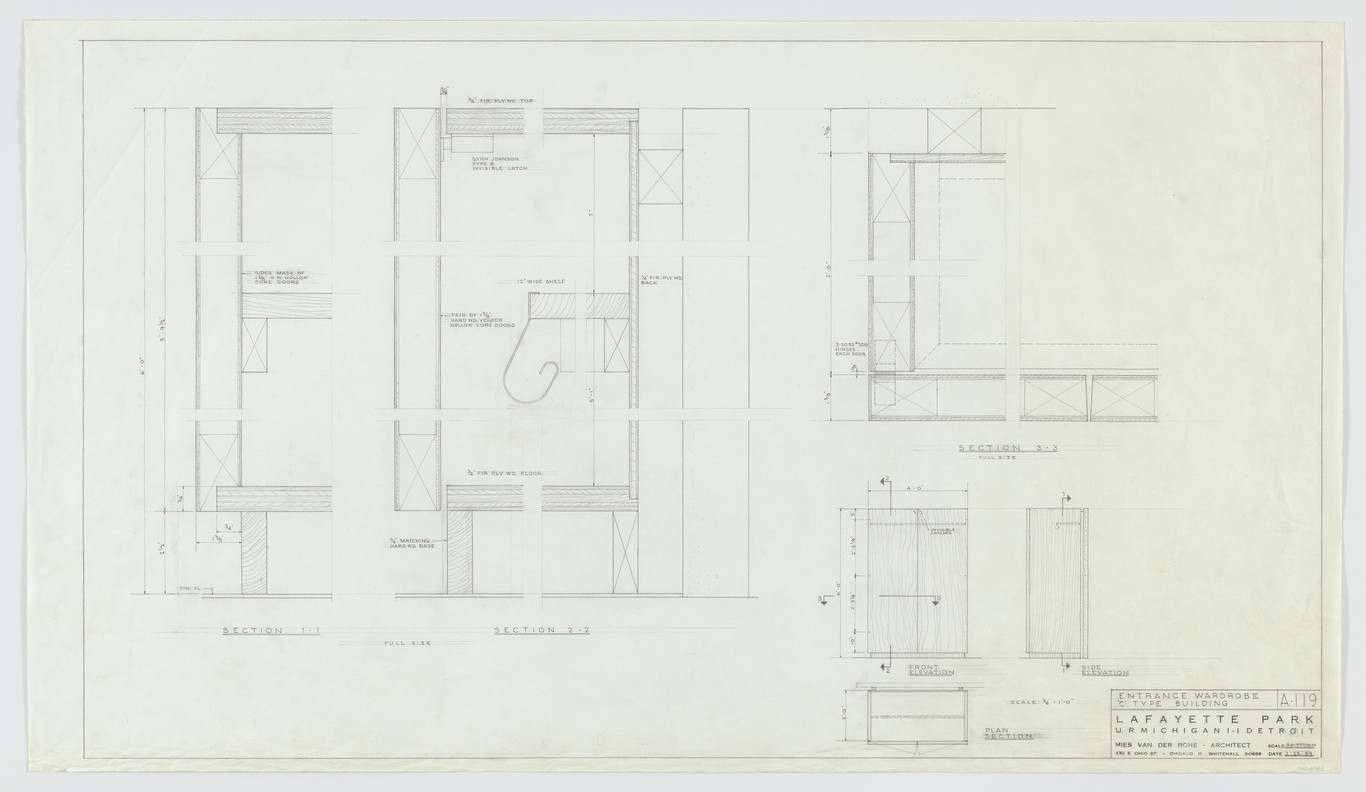 Our absolute favorite part of the project is the special closet rod that you designed. We found no documentation of its purpose or what compelled you to reinvent the closet rod but there it is, again in the original drawings, showing up as a backwards J-shape. We kept them, had them stripped of decades of paint, and powder coated each one a different color (seen above in blue). We can’t help but think of this as a chance to hot-rod a piece of the house, which seems like exactly the right thing to do in the Motor City.